Long-term seismological observations on the territory of northern Moravia and Silesia proved the existence of natural seismic events (microearthquakes) in this region. However, the overall level of seismic activity can be estimated as low, especially as for their number, but also in regard of their intensity classification according to the magnitude scale. Another important source of regional seismicity comes from the mining activities in the Karvina area and the adjacent Polish coal regions. Seismic short-periodic stations operated on the territory of Moravia represent virtual network called MONET that is operated by Institute of Physics of the Earth, Masaryk University of Brno (IPE), and co-operated by the Institute of Geonics of the CAS, Ostrava (IGN). The basic, internal part of the MONET network in its current configuration consists of 10 stations in northern and central Moravia operated by IPE Brno, for the purposes of the CzechGeo/EPOS project, KLOK, STEB and ZLHC stations operated by IGN Ostrava are also assigned to this network.

On the territory, seismic stations of the Czech Regional Seismic Network are also operated. Institute of Geophysics of the CAS, Prague (IG) is administrator of this network.

The automation applied in the process of transmission of all available seismic data and evaluated results significantly contributes to the primary determination of earthquake foci almost in real time; arrival times of P- and S-waves and data describing position of microearthquake foci are part of regional seismic bulletin, which is being completed by the IG. Data from the seismic stations ZLHC and KLOK that is not directly included in the regional seismic bulletin is also processed and added with a certain delay. This data can serve for the refinement of already localized focal regions. The purpose of this virtual seismic network is completed the detection of weak microearthquakes, which are expected in the immediate vicinity of the known focal regions. At present, a mutual exchange of data observed at the seismic stations included into MONET is considered a purposeful approach. On this basis, it is possible to determine foci positions in the region under investigation more precisely by extending the data set. 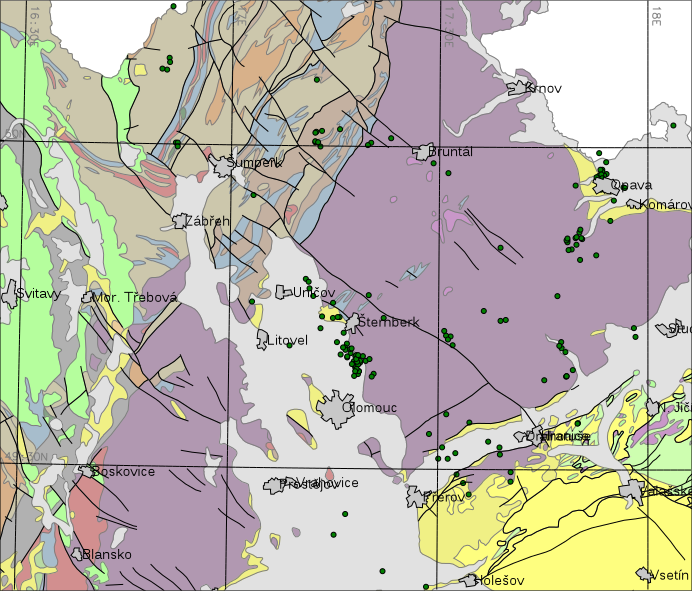 The foci of microearthquakes detected by seismic stations.

A very important group of observed seismic events encompasses events denoted as technical seismicity. This group includes, first of all, events induced by mining and quarry blasts fired in quarries situated on the territory of northern Moravia and Silesia.

Mining induced events originate mainly in the Karvina area, but also in Polish coal mines near Katowice and Rybnik, as well as copper mines situated in the Legnice-Glogow region. Rockbursts and very intensive mining induced seismic events are also reliably detected by the stations of the Czech Regional Seismological Network. Events from the technical seismicity category, which are not included in the regional bulletin, represent a complementary source of information included into local bulletin of the stations operated by the IGN.

As for research objectives relating to the technical seismicity, observations of quarry blasts are considered very purposeful and useful. This has several reasons. First, the knowledge of a quarry position and the firing time of explosions makes the unambiguous discrimination between an explosion and a tectonic microearthquake easier. Second, the knowledge of the exact time of a quarry blast also enables to test and operate a precise current velocity model (see visualization and animation of a 3D regional velocity model) in order to check the accuracy of the quarry localization. Moreover, records from a quarry blast can be used in research of the properties of seismic waves generated by the explosion. Overall available information will, therefore, be continuously put into the local bulletin, which will serve for seismological data interpretation by other institutions. Similarly, information about mining induced seismic events enables to obtain new parameters of seismic characteristics of the area.

A part of the Czech Regional Seismological Network, operated in cooperation with IGF and VSB-TU. 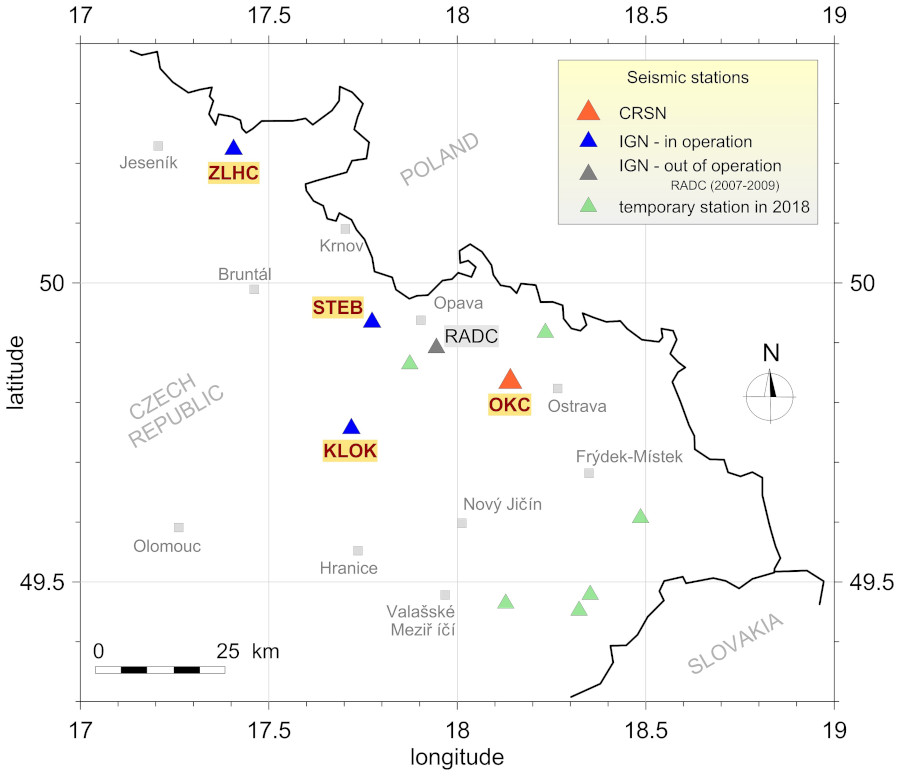